This design was based upon a selection of illustrations from a book from 1830 by Thomas Robson called British Herald. It depicted family crests when it was important to advertise who one was, particularly on one's horse and carriage. These very fine 19th century engravings were used as black transfers onto white Imperial tankards and Cylinder shaped coffee sets in 1966, plus a few other items including some on the Serif shapes. A few pieces were printed onto glossy orange items in 1970. The back stamp does not bear the name of Portmeirion but is definitely an oval style stamp used by the factory bearing the name of the design and Made in England. 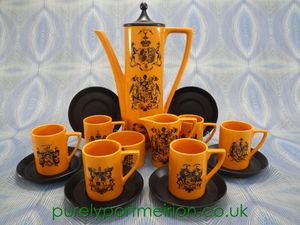