Julian Teed, former Creative Director at Portmeirion, developed this amazing range in the early 2000's. Julian designed a range of items using shaped ware already designed by Susan Williams-Ellis, employing a little used crystalline firing process, one never used at the factory previously, and he called it 'Starfire'. This collection is a highly elegant, modern classic with each item being totally individual due to the unique process involved in the production. An iridescent sheen created by the crystals are combined within a two tone design on each piece. The crystal areas shimmer with a jewel-like patina that reflects the natural relationship between pottery and the precious crystals of the earth's crust. Each piece is totally stunning and mesmerising. The range was produced in four colourways, Jade, Opal, Ruby and Sapphire. 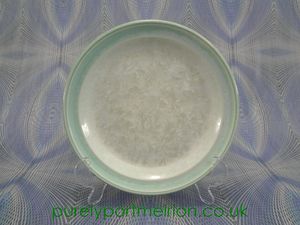