The Gold Diamond range was designed in 1961 by Susan Williams-Ellis; a dramatic shift in course from her Malachite, Moss Agate and Dolphin ranges. The hand painted Gold Diamond range was worked in gold, platinum and bronze, in six different geometric designs. Susan formed a boxed, gift set, of one of each different designs on coffee cups, called the Neapolitan set. Dramatically different for those times, it wasn't to everyone's taste, so individual items were available. They were very expensive to produce in both labour and metallic lustre costs and so a transfer print version was produced. The early Gold Diamond coffee cans were produced using bone china blanks. Gold Diamond was only worked on coffee ware and a few jug shapes and was unlikely to have been produced on dinnerware. Gold Diamond was the first of the Portmeirion graphic patterns and typical of the early 1960's. Unfortunately, the pattern was copied extensively and many poor but close imitations can be seen around and about. Originals are highly collectable in my opinion! 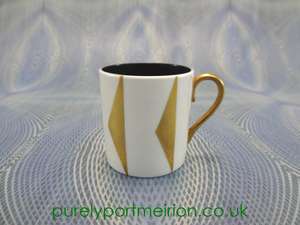 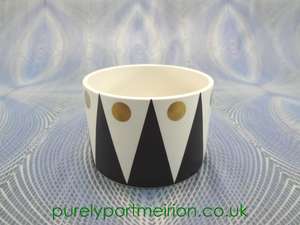 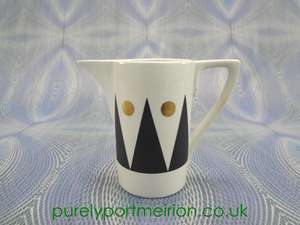